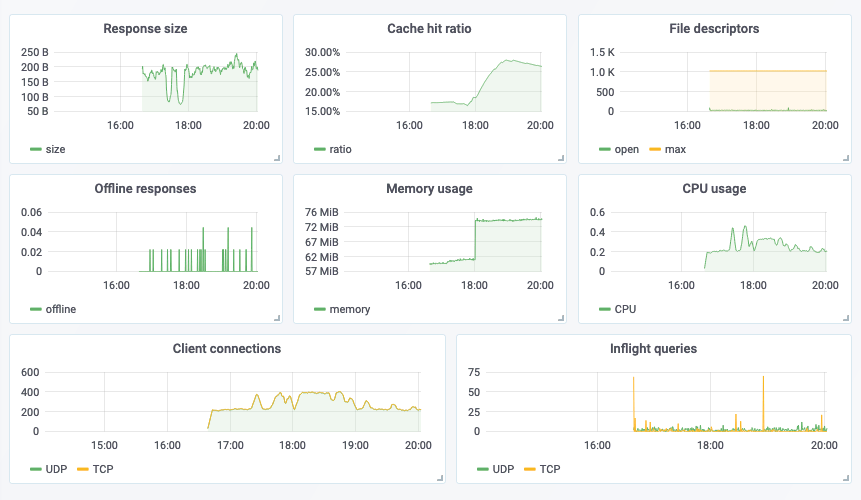 The proxy supports the following protocols:

All of these can be served simultaneously, on the same port (usually port 443). The proxy automatically detects what protocol is being used by each client.

Debian packages, archives for Linux and Windows can be downloaded here.

Nothing else has to be installed. The server doesn't require any external dependencies.

In the Debian package, the example configuration file can be found in /usr/share/doc/encrypted-dns/.

Rust can installed with:

Once rust is installed, the proxy can be compiled and installed as follows:

The executable file will be copied to ~/.cargo/bin/encrypted-dns by default.

dnscrypt-server-docker is the most popular way to deploy an encrypted DNS server.

This Docker image that includes a caching DNS resolver, the encrypted DNS proxy, and scripts to automatically configure everything.

The proxy requires a recursive DNS resolver, such as Knot, PowerDNS or Unbound.

That resolver can run locally and only respond to 127.0.0.1. External resolvers such as Quad9 or Cloudflare DNS can also be used, but this may be less reliable due to rate limits.

In order to support DoH in addition to DNSCrypt, a DoH proxy must be running as well. rust-doh is the recommended DoH proxy server. DoH support is optional, as it is currently way more complicated to setup than DNSCrypt due to certificate management.

Then, review the encrypted-dns.toml file. This is where all the parameters can be configured, including the IP addresses to listen to.

You should probably at least change the listen_addrs and provider_name settings.

Start the proxy. It will automatically create a new provider key pair if there isn't any.

The DNS stamps are printed. They can be used directly with dnscrypt-proxy.

There is nothing else to do. Certificates are automatically generated and rotated.

If you are currently running an encrypted DNS server using dnscrypt-wrapper, moving to the new proxy is simple:

Done. Your server is now running the new proxy.

The proxy includes a key cache, as well as a DNS cache to significantly reduce the load on upstream servers.

In addition, if a server is slow or unresponsive, expired cached queries will be returned, ensuring that popular domain names always keep being served.

The proxy creates and updates a file named encrypted-dns.state by default. That file contains the provider secret key, as well as certificates and encryption keys.

Do not delete the file, unless you want to change parameters (such as the provider name), and keep it secret, or the keys will be lost.

Putting it in a directory that is only readable by the super-user is not a bad idea.

Domains can be filtered directly by the proxy, see the [filtering] section of the configuration file.

Access control can be enabled in the [access_control] section and configured with the query_meta configuration value of dnscrypt-proxy.

Prometheus metrics can optionally be enabled in order to monitor performance, cache efficiency, and more.

Enabling Anonymized DNSCrypt allows the server to be used as an encrypted DNS relay.